Aaron Just as Much Called as Moses 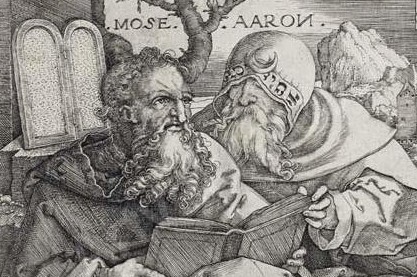 When the Lord appeared to Moses in Exodus 3-4, he must also have appeared to Aaron in Egypt weeks earlier.

“Isn’t Aaron your brother? I know he can communicate well. He is on his way to meet you as we speak. He will be very glad to see you. He will assist you as your spokesman. I will speak to you and you will speak to him conveying My message to Pharaoh and the people – almost as if you will act as God for Aaron and he will act as a prophet for you.”

*Aaron must have been informed by the Lord of pretty much the same message Moses received.

*By the time Moses saw the burning bush, Aaron was already en route through the deserts of Egypt/Midian toward Mt. Horeb.

*In order for God’s perfect timing to play out, Aaron had a several week head start to meet Moses fulfilling God’s pledge of help.

*For 40 years Aaron had no idea of his younger brother’s whereabouts as a runaway fugitive from Egyptian justice. Suddenly when he was 83, the Lord revealed His deliverance plans of Exodus starring the 80-year-old Moses, co-starring Aaron as a mouthpiece. (See the Burt Lancaster movie called: Moses the Lawgiver for a great dramatization of the real life Biblical narrative.)

*Aaron readily obeyed to take on the double task of leaving wife & sons (Eleazar, Nadab, Abihu, etc.) to escort Moses back to Egypt (1000-mile round trip thru desert wilderness at advanced age of 83) and agree to the huge assignment of co-deliverer/prophet of the Grand Exodus to   fulfill God’s long-awaited promise to Abraham & forefathers to the Hebrew nation.

What great faith! What amazing obedience! Where Moses is recorded as balking, hesitant, unbelieving and most reluctant to take on the heavenly calling, Aaron (being just as called as Moses) willingly complied with the Lord’s outlandish plan and set out into the desert following oasis/trader/bedouin trailways well by well to reach Midian. All while fully believing God’s promise for provision/protection to be reunited with his long-lost brother and be part of heaven’s wondrous deliverance of God’s people.

Psalm 106:16 has an amazing testimony about Aaron as God’s High Priest. The Lord speaks highly of him despite his major lapses with the golden calf cave-in under pressure and grumbling with his sister Miriam against Moses’ leadership position: “Aaron was consecrated/sanctified to the Lord.”

Sadly, like his younger brother Moses, he was barred from entry into the promised land as consequence for his sin. But as a sin-forgiven saint trusting in the Lord, by faith, he was atoned for by God’s blood of the covenant to be fulfilled in the Messiah (see Hebrews 7-10).

By faith, Aaron listened to the Lord’s call, left everything behind to certainly seek his brother Moses and then gladly joined him in the supreme enterprise of Exodus!