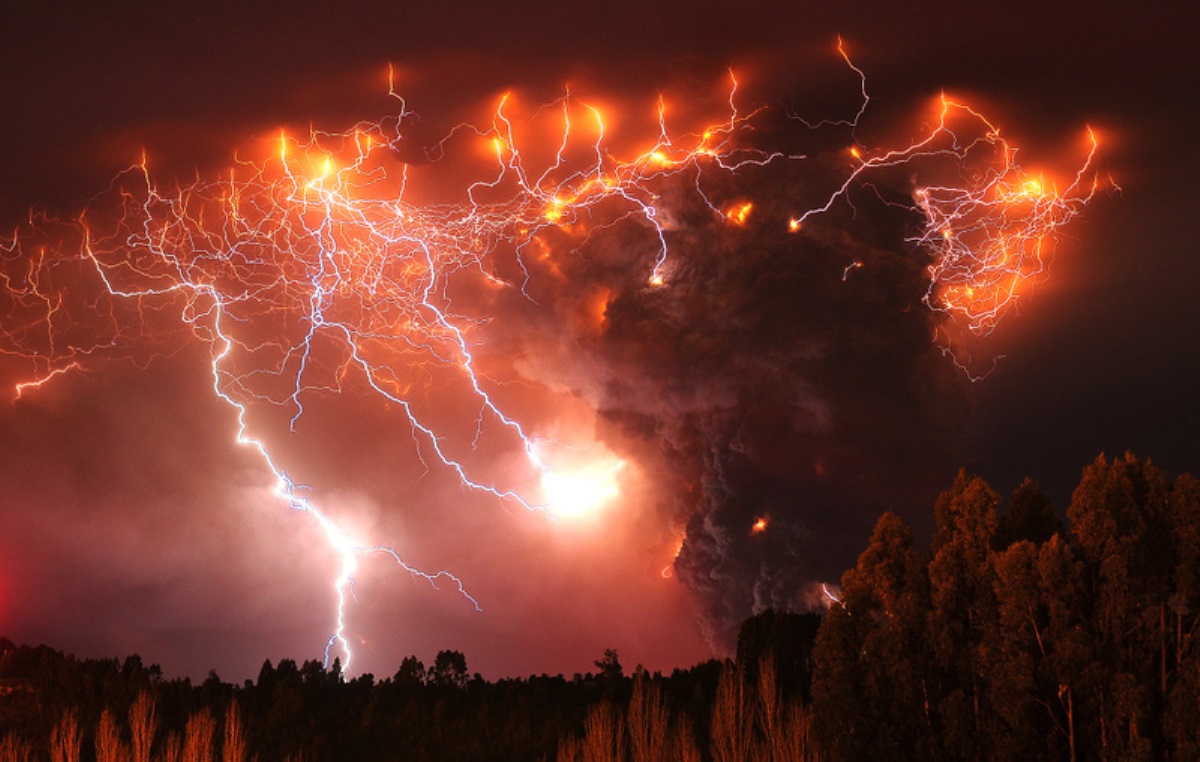 Psalm 19 is a revelatory hymn about how God makes Himself known. The first half personifies the creation as declaring and proclaiming its Creator.

Nature’s laws, precepts, statutes, regulations governing its behavior in the heavens as observed on earth give loud and clear testimony as to their Formulator-as-Designer-Regulator’s wondrous genius, creativity, power and loving care for all He handcrafted. Creation as spokesperson gives secondhand wordless witness to God’s indirect self-revealing. God informs and notifies the earth’s inhabitants in general universal terms through inanimate objects and impersonal forces of the natural order.

As nothing is hidden from the sun’s thermal energy, so nothing and no one is hidden or impervious to the energy of the Son of God as caretaking regulating ordering governing upholding Logos of God’s creation.

The second half praises God’s personal firsthand self-revealing directly to His creatures fashioned in His image. The planet’s people are on notice by specific worded witness from the Lord Himself mediated through human language. Before Moses, the Lord communicated heaven’s thoughts orally. Moses was commissioned to reduce God’s oral thoughts to writing in permanent perpetual unmistakable form for worldwide preservation for mankind’s benefit.

David prophetically reveals vital truths about God’s written revelation from personal experience and his deep knowledge of Holy Scripture (Genesis – Ruth, Job, Moses’ & early Psalms had been produced and preserved up until David’s time with his contemporary Samuel the prophet developing his scriptural historical eyewitness account.)

“The Lord’s law is perfect, converting souls.
The Lord’s testimony is faithful (reliable), making wise the simple.
The Lord’s righteous ordinances/precepts are correct, rejoicing the heart.
The Lord’s commandments are bright/illuminating, enlightening the eyes.
The Lord’s fear is hallowedly pure/sacredly unspoiled/impeccable/
flawless/fault-free/utterly pristine, enduring forever.
The Lord’s judgments are entirely true and righteously justified in the selfsame way.”

The one phrase that throws most commentators is “The Lord’s fear…” It seems out of place, not a synonym for God’s self-disclosure like the other phrases. But actually, it is very much in place as a prime way the Lord communicates His Presence.

David as a diligent student of Moses knew the expressions “Isaac’s Fear”, “My Fear”, “Fear of the Lord”. When the Lord appeared to Abraham, Isaac, Jacob, He had to calm them by easing their discomfort, “Do not be afraid.” Recall the stricken reactions of Isaiah, Ezekiel, Daniel at God’s overwhelming Presence; Christ’s transfiguration left his disciples stunned at both His Glory and His Father’s Voice from the Shekinah Cloud; Mary Magdalene, Thomas, Paul, John in abject worship prostrate posture.

Exodus recounts the Lord informing Moses and the people that His Presence is fearful, wondrous, holy, awesome even to evoke frightening dread among sinful mortals.

Rahab in Jericho confesses that the fear and terror of the Lord and His people had fallen upon them, leading her to repent and be saved illustrated by the scarlet cord.

Solomon’s own key to his Proverbs: The Lord’s fear is the beginning (Genesis, starting point) of knowledge (about Heaven’s Most High God of Glory). Without appropriate trembling respect and utmost regard for the Fearsome/Awefull Lord and what issues from His Mouth, no one can truly know anything from the getgo.

See Isaiah 66 where the Lord declares heavenly regard for those trembling at His Word. Remember Lot’s wife! Nadab and Abihu. Uzzah fatally touching God’s Ark.

Ananias and Sapphira. Panic-inducing Angel of the Lord appearances in Old Testament and Revelation to John.

Thus, “the Lord’s fear” must also be a crucial component of God’s self-revealing as another synonym for written Scripture (God’s permanent documented reputation/tremble-worthy/fall-down-at-His-awestriking-Voice identity) since it must fit the other five descriptors of how the Lord discloses Himself to people. If it was merely oral or eyewitnessed but undocumented, it would not remain or endure forever. But in written form, it has staying power. David would not have known how fearsome Moses’ God is unless Moses sealed it in Scriptopgraphy. David’s lifelong searching and meditating on the Holy Scrolls inspired him to recall, repeat and forward the expression onward for his and subsequent generations such as ours. Double-preservation and prophetic endorsement of Heaven’s scare-inducing-Voice-in-Print.

The Lord-as-Object-of-Fright in written description passed on by Moses and Joshua in the temple scrolls enshrined in the Ark of the Covenant is utterly free of fallen human stain or germs or corruption or shameful nakedness or defilement as an untooled stone altar sacred to the Lord. That which is absolutely clean, antiseptic by nature, needing no purifying, acts itself as supernatural cleansing cathartic clarifying agent for those who encounter God-as-Fear producing utmost-regard-fear of God in worship, devotion, sanctified holiness, godly reverence, supreme respect and prostration of heart, mind, soul and being in awed, wondrous, captivating love and affection fulfilling the Greatest Commandment. Like Job the righteous who feared God shunning evil, like Abraham the righteous who trusted God renouncing idols, like Perfect Christ who loved righteousness and hated wickedness completely and without lapse revered and obeyed His Father in his whole Being.

The six dimensions of divine disclosure: law, testimony, righteous ordinances, commandments, fear, judgments are all of a piece. Interlinked, mutually essential to fully depict and extol how wonderful and valuable to have the supreme blessing of knowing and revering and worshiping the God of unworded Creation and worded Communication. As the heavens speak, even more so the scrolls speak. As the sun energizes and animates, even more so Moses’ words radiate heaven’s spiritual light and heat for illumining and charging the soul. Yet later Jesus can claim, “Heaven and earth will pass away, but My Words will never pass away.” Most likely an allusion to this very Psalm 19 as Great David’s Greater Son quotes his father ProphetKing David in Messianic fulfillment.

Psalm 19 offers a blessed ending of praise and prayer from the Word of God to the One Who is a God of His Word. When God reveals, His servant-child revels. What the Lord voices, each sincere listener values. When Heaven itself communicates, the recipient reverently and repentingly communes.

David compares Sacred Scripture that was his inspiration for the Psalm to the most prized possession and favored food. What we treasure on earth and what we consume to survive and enjoy is eclipsed by the surpassing God-gift of His Own Word to us. The Lord miraculously charged human authors to compose delights for our minds, souls, hearts. Along with tender affection, God’s message to us includes tough love to warn us and keep us in relational faith with Him. Both forewarnings in advance and admonishing after we sin are designed to bring us back to God’s Own Heart and avoid following our own passions. Similar to the Lord’s Prayer, forgiveness, and restored fellowship are sought after to prevent gross trespassing and great transgressing of God’s will. The Lord’s benevolent rulership should prevail, not our willful selfish rebellion.

Grace is guaranteed if we gravitate toward God’s Gospel.

David can’t help but utter one final hopeful expectant outburst of jubilant joy about God’s personal relating, revealing and responding to him in live, real-time speaking from His Very Lips: May the words of my mouth (in devoted answer to Yours) and the meditation of my heart (echoing back Your affection) be pleasing in Your sight, O Lord My Rock (foundation) and My Redeemer (freedom)! (You have first perfectly and constantly pleased me, let me somehow please You in return!)

How to reconcile Trembling, Tenderness, and Trust toward our Audible Awesome Affectionate Attested Attractive Attentive FatherGod in SaviorChrist? In a word: WORSHIP!