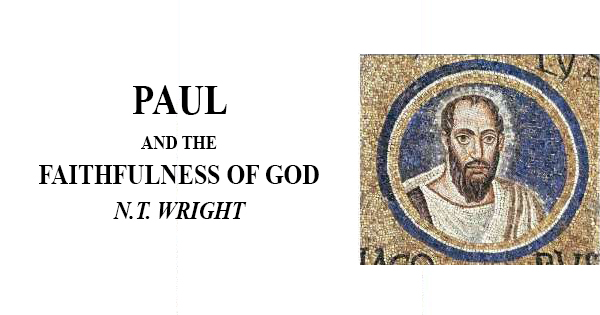 After reading the tome and noting favorite authors cited/sources referenced, this is a digest of the salient points summarized as an informal review.

Helpful:
You can’t fault the tome for lack of thoroughness! He covers lots of yardage from end zone to end zone and even goes off the field to get fullest wide-angle lensing. Kudos for a labor of love in expounding his hypothesis a la ‘Critical Realism’ revamping Paul’s theology based on exhaustive 20th-21st-century scholarship paradigm. (His global Pauline ecclesiology map coordinates of degrees/minutes/ seconds are monotheism/election/eschatology; latitude/longitude equate to covenant/ reconciliation.) Few scholars today are so immersed in extra-biblical outsourcing as Wright when it comes to re-contexting Bible text to arrive at novel views of what Paul thought about His Majesty Jesus Christ’s royal gospel. It’s an entirely reworked theologic system to wholesale bypass any reformational (i.e. western, medieval, middle ages) layovers: he time travels, as it were, backward direct nonstop to the original milieu – Palestinian Judaism under Caesar’s imperial governance by Pilate, Felix, Festus & local jurisdiction of the Herod dynasty overseeing Sanhedrin’s Torah law for colonized Jews in Gentile-dominated exile in their own promised land Israel. This magniloquent summum opus is a critical historian’s travelogue of his scholarly quest to once for all textually excavate the Genuine Jesus via re-interviewing the real Palestinian Paul too long concealed by millennia of cumulative church-imposed creedal/ confessional encrustation needing, at last, to be peeled away for purest restoration of God’s-return-to-Zion original gospel: Jesus-as-Lord bearing all evolved societal dehumanizing evil/injustice in his messiah-self standing in for Israel-incarnate as embodied personification of the reconciling God to set mankind aright inaugurating a new kingdom-come order of gradual heaven-on-earth to ultimately fulfill the Lord’s Prayer lived out in every professing Christian (protestant, catholic, eastern orthodox, even any outside formal church who are by some measure of faith covenant-included in the God-thru-Abraham-thru-Jesus-as-peace-broker-diplomat pact restoring Jew + Gentile = faithful collective covenant community of ecclesial ecumenism in messiah-as-reconciler.)

It was also helpful for him to clarify disputed points about his distinctive Schweitzer-Sanders-Dunn,et al-Anglican academy-scholastic guild worldview so readers have a fuller feel for his updated reboot positions about how Romans-Philemon portrays new-perspective gospel of God’s faithfulness to Abraham’s covenant (of all Paul’s writings to choose from, tome opens with minor letter to Philemon(?!?) as master key unlocking his meta-thesis: social harmony across man-made boundaries, truce, Reunion, koinonia oneness in ‘messiah-family’ for Paul summits above all theology as central symbol of cultural transformation). He has succeeded in setting himself quite apart from the previous predominant thrust of what Paul’s project entailed. Some might call the professor’s makeover of Pauline exegesis: Contradiction, while others would say it is outright Contradiction of historic evangelic confessional Protestant Biblical faith (he himself claims to be ‘Reformed’). The dramatic shift from *Paul slave-apostle of Savior Jesus Christ’s grace/mercy on the Cross to ungodly sinners needing eternal life by repenting from unrighteousness* to *Saul/Paul of Tarsus/Jerusalem, Benjamin’s tribe (Abraham’s stock) Greco-Roman Pharisee Jew (former fanatic persecutor of Christians) in exile faithful to Messiah’s embodiment of YHWH’s covenant faithfulness* pulsates through every page.

Unhelpful:
This all-encompassing density often means excess repetitiveness belaboring points, some major (102 pages re-interpreting Rom. 9-11; Philemon as entry window portal into deep heart’s core of Pauline theology?? Seriously?!), many rather minuscule, arcane, even objectionable. The sense is he could have said much the same at half the length/price. Since we already have his take on Romans in ‘for Everyone’ commentary series, it came across superfluous to re-expound in duplicate detail here when little really new is introduced not already in the commentary. Also quite unhelpful to gloss over Book of Acts (chapter 9-28) since this is Paul in action practical day-to-day life vs. written words of epistles in isolation. The full impact of 1-2 Corinthians is lessened without Acts 17-18; Philippians sans Acts 16; Romans apart from Acts 27-8; Ephesians absent Acts 19-20; Galatians defense against hetero-gospel Judaizersers not factoring in Acts 9,13-15,22,26, etc. literal historic real-time narrative of events/theology in real-world context. Finally, however his ‘critical realism’ tries once for all to absolute nail down Paul & his actual gospel (All Wright Reveals that Paul Really Intended but No One Ever Knew – Until Now), such radical ‘reforming the deformers’ must harmonize in balance with Peter, John, Hebrews, Luke, etc. and of course our KingdomSavior Jesus Himself in all 4 Gospel eyewitness accounts. Unhelpfully, that crucial holistic NT contexting framework is minimized if not altogether absent here. 2 stars deducted for these & other unhelpful inclusions/exclusions per preset controlling assumptions of his grand gridiron (many more severe missteps that reviewer Prof. Doug Moo critiqued. Prof. Larry Hurtado’s pre-review blog demurs: “Wright seeks a macro-conceptual/theological narrative through which to read the entire NT. To my mind, the risks in this include imposing such a narrative monolithically upon texts.”)

Hurtful:
Upon comparing his Justification, Simply Christian, After You Believe, Surprised by Hope, Kingdom New Testament (not just a retranslation, but a transplantation i.e. targumic interpretational remake version) and trying to correlate to this ‘catch-all compendium’ of his Critical Realism template starting & ending with Abraham’s Covenant, ironic that Paul’s original Gospel of “unrighteous sinners’ faith in the undue gratuitous comped non-contributory instant-leprosy-healing debt-canceling (‘Be clean! Be forgiven! Paid in full!’) 100% mercy-salvation of Righteous King Jesus (sin-bearing mercy seat Savior judgment Messiah)” gets lost or detoured along the reconstruction project. As many new insights as are offered in this voluminous volume, what was missing overshadowed what filled all these pages about covenant-faithful cultural-reconciliation societal-transformation. (Brian McLaren, Rob Bell & other emergent voices quote Wright early and often in their books). Paul in his own theopneustos words says Jesus is the new ‘last’ Adam, not the new Abraham. When I closed the book, the distinct impression came across that Paul encountered father Abraham on the Damascus road, not (monogenes Word of the Lord incarnate)Son of God Jesus. Did anyone else notice how he treats the Triune Godhead SupremeBeing Holy Spirit Co-equal Deity in lower case (spirit, holy spirit) similar to Jehovah Witness concept of agented earthly manifestation, breath, illumining, divine force projection, remote animation, energy emanation, influence by heaven-sent zeitgeist worldview? The best he can do is use the label ‘divine entity’ for both Messiah and ‘the spirit’ (but not the Father Himself??). What exactly does he mean by ‘divine entity’? godlike? avatar? Personified role-acting? Differentiated unity? Monadism? Modalism? Oneness Pentecostalism? (Thor is a ‘divine entity’, not SupremeBeing!) How does this square with Nicene/ Athanasian creeds re the Bible’s Tri-Personal Deity (Father x Son x Holy Spirit = 1 True God)? Most odd to say the least!! He also suggests: Genesis 1-3 is picture language (6 day creation?, Adam & Eve called out from evolved population of emerging hominids already under sin/death to plant a garden, Fall? curse?) literary device epic mythistory, ‘the satan’ as a subpersonal figure (‘it’) of accusing influence (Jesus hears inner voices when tempted by ‘the satan’ but not an actual personal fallen-angel Devil??), hell as metaphoric for ultimate ridding of evil from God’s cosmos in the final future state. In this tome one hears the dominant voice of Nicodemus (Israel’s master teacher) or Gamaliel (Paul’s Pharisee mentor) or Essenes (Qumran scribes) expounding rabbinical Torah as opposed to the apostle Paul in his own theopneustos words proclaiming our Savior & Lord Jesus Christ crucified & risen by the power & anointing of God’s Holy Spirit to save doomed sinners from perishing. It’s time for true humble Bible-friendly (not Bible-hostile) Bereans to test the spirits to see if they are in fact from God. What is desperately needed among today’s churchgoers is the Bible-Jesus & the Jesus-Bible!! In the end, Wright’s supreme unrighteousness is while spending a lifetime as critical-realism-historian, 2nd-temple-textual expert, 20th-century Anglican Academy-indoctrinated theologian seeking to achieve mastery of the Scriptures, he has failed to be mastered by the Scriptures. Simply put, the Apostle Paul would hardly recognize himself or his crucified/risen SaviorJesus in all of Wright’s textual reanalysis and plastic surgery on the Bible. Deduct 2 more stars. [Btw, Amazon needs to update bio profile on the Rt.Revd.Prof. as former bishop of Durham for 3 years now a scholar-eisegete in Scotland.]

“Since we already once for all have been completely/fully justified by nothing but faith, we continue to have peace with God (reconciled right standing/restored relations, name written in heaven) through our Lord Jesus Christ.”

“Christ our Passover Lamb has been sacrificed..look, the Lamb of God who takes away the sin of the world!”

“The Kingdom of God is righteousness in the Holy Spirit along with peace and joy.”

“In the Gospel, righteousness from God is revealed by faith for believing – as it is written: the righteous by faith will live (eternal life).”

“The tax collector beat his breast, ‘God be merciful to me such a sinner!’ This man went home justified (found/rendered/deemed/considered righteous in God’s sight). Self-exalters will be humbled, those humbling themselves will be exalted.”

“If anybody confuses/perverts/preaches a different (heteron) gospel besides what you already accepted as (originally) evangelized to you, let them be Anathema!”

“This is the name by which (Messiah) will be called: the LORD our Righteousness.”

“Through Jesus, the forgiveness of sins is proclaimed to you, and through Him, all who believe are justified from everything you could not be found righteous by Moses’ law.”

“God has bound everyone over to disobedience so He may extend mercy to all.”

“The God of Peace will soon crush Satan under your feet.”

“Unless you believe that I Am, you will die in your sins..unless you repent of your sins you will certainly perish.”

“Now God commands everyone everywhere to repent. For He has set a day when He will judge the world with righteousness by Jesus the appointed One. He has given credible evidence of this to everyone by raising Jesus from the dead.”

“Turn them from darkness to light, from Satan’s power to God, so they may receive forgiveness of sins and a place among those sanctified by trusting in Me.”

“Christ Jesus came into the world to save sinners of whom I am foremost main offender.”

“God poured out His love into our hearts by the Holy Spirit whom He has given us.”

“If anyone does not love the Lord, a curse on them. Marana tha!”

“God is righteous Who will pay back trouble to those who trouble you..this will happen when the Lord Jesus is revealed from heaven in blazing fire with His powerful angels. He will punish those who do not (relationally) know God and do not heed the Gospel of our Lord Jesus. They will be punished with everlasting destruction and shut out from the presence of the Lord and from the glory of His might.”

“Wait for God’s Son from heaven whom He raised from the dead – Jesus who saves us from the coming wrath.”