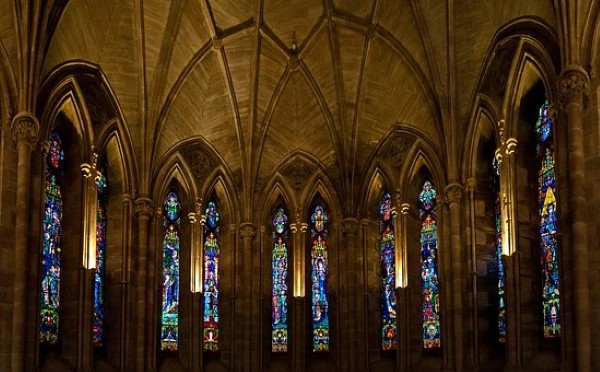 Faith (of) Jesus Christ = Objective Genitive (about, concerning, consisting of)

One way is to use prepositions to clearly indicate meaning in context. They are best understood as reflecting spatial geometry of motion or position. If we picture a solid object like a house and a person living there, we can imagine multiple possibilities of where the person can be in relation to that house. Entering into, coming out of, climbing on top of, passing alongside, walking around the perimeter, standing next to, jogging away from, sitting inside, leaning against, heading for/toward home.

Acts 16 has Paul and Silas preaching the Gospel to the jailer in Philippi, ‘Believe on the Lord Jesus and you will be saved.’ The preposition used is ‘epi’ = over, upon. The translation is proper in context to convey the meaning that Jesus is the rightful object of one’s faith. If Jesus is pictured as the house, our faith is placed on or upon Him.

I could imagine buying that house and putting our money down on/upon it financially and legally. Or putting a coat of paint on/upon it. Or if we trust a chair to actually hold our body weight, we sit down on it, resting ourselves entirely upon the object of our confidence to completely handle us.

Acts 26:18 quotes Jesus commissioning Paul for his apostleship upon conversion outside Damascus. ‘So, they may receive forgiveness of sins and a place among those sanctified by faith which is in Me.’ The key prepositional phrase here is ‘by faith which is in Me.’ The preposition is ‘eis’ = in, into. The translation gives the meaning that, again as above, Jesus is the rightful object of one’s faith. Using the house illustration, Jesus’ door is wide open.

We need only to accept the welcoming invitation and enter into His home. We were once outside, now we come through the opening to arrive inside (another Greek preposition used elsewhere: ‘en’ = in, within, inside.) We enter ‘eis’ into the home (action of motion) where Jesus is already ‘en’ inside (position not motion).

Another way is not to use prepositions, but a particular grammar and word usage where meaning is intended by syntax, word proximity, sentence structure. Nouns have differing forms to indicate usage and purpose in phrases. In the Genitive Case (genre, kind), nouns are used as adjectives to modify or describe other nouns. This is indicated typically by English ‘of’ between 2 nouns: ‘this kind of that’.

In describing the Christian faith, Paul and others use the phrase, ‘faith (of) Jesus Christ’, where there is no Greek work used so English clarifies the intended idea – a Jesus Christ kind of faith, i.e. Christ-ian faith.  The question arises whether Jesus is the object of faith (Objective Genitive) or the one doing the believing, himself being faith(ful) or even the source of one’s faith (Subjective Genitive).

In nearly all instances, Jesus is described as the intended object of our faith in order for anyone to be saved by the Gospel. Any other reading with implied verbs of Jesus’ activity as subject (faith exercised by, faith(fulness) shown by, belief springing from) are hardly the first that come to mind from a natural take on the verses, the flow of thought of the context and how the Gospel has been understood for two millennia (it’s about our faith receiving Christ’s faithfulness to be saved that seals the deal.) All Christ did for us unreceived by personal faith is forfeit, saving no one, like unbreathed air or unfilled prescription.

As Paul explains in Romans 1:17, ‘in the Gospel, God’s righteousness is revealed by faith for believing’ – it is by faith (offered free) in order to be actually received when believed. The Gospel-by-faith that remains unbelieved is of no use. Christ took all His righteous steps without our help, but we must take our step of repenting faith to receive gifting of God’s righteousness in Him. The prepositional uses in Scripture (belief in God from OT, belief in Jesus from NT) strongly reinforce this conclusion.

Romans 3:21 is the first direct mention by Paul on how someone is saved, similar to the Philippian jailer. ‘But now God’s righteousness has been made known which is by faith (of) Jesus Christ for all who believe.’ Since the Biblical witness in both testaments is heavily weighted on God Himself and Christ Himself being where our faith rightly belongs, we eliminate the Subjective Genitive from consideration, leaving the Objective Genitive as most suitable.

There are several categories or subtypes of Objective Genitive usage. To use a few examples:

Locative – Jesus (of) Nazareth; eye (of) needle = both possession (needle’s eye) & position (where)

Descriptive/Plenary – Revelation (of) Jesus Christ = both object (about, regarding, pertaining) & source (from whom, whose)

Galatians 2:20 gives Paul’s personal motto of life in Christ where he says, ‘I live by faith (in) the Son of God.’  With no preposition (‘en’ or ‘eis’), the reader must determine the intended meaning from usage and context. The translation properly assigns Jesus the starring role as object of Paul’s faith IN God’s Son.

Still another factor in determining meaning is separate from use or non-use of prepositions. That is understanding the Greek word ‘pistis’ as meaning in English not just ‘faith’, but ‘belief’, ‘believing’. This helps greatly with the otherwise puzzling or seemingly redundant Romans 1:17, ‘revealed from/by (ek) faith to (eis) faith’, = by faith leading to/resulting in belief/believing. The conceptual of faith-righteousness (vs. works/law-righteousness) is to be activated, claimed, appropriated, practically applied from objective to subjective, unrealized (though fully realizable for any) to realized. The belief is for believing, just like a fully drivable car is to be driven, not pushed by hand or pulled by horses. Turn the key and let the auto-mobile move itself, you don’t have to move it yourself. But if you don’t turn the key of faith in the Gospel, it just sits there, or if you try to self-gospelize by moving yourself into God’s righteousness, you’ll get absolutely nowhere!

That is seen also in Romans 3:3 – ‘Does their unbelief (‘apistis’) nullify the faith (of) God?’ This is usually translated as ‘pistis’ = faithfulness, very seldom found as Paul’s intended meaning in such usage. Likely better to see ‘pistis’ = belief, believing so it reads, does their unbelief nullify any belief (content trusted)/believing (act of trusting) in/directed toward God (being faithful, worthy of trust, fully believable unworthy of doubt)? Paul’s answer? ‘Far from it! Let God be true and every man a liar!’

The reader must decide in context if Paul’s main emphasis is (1) God’s faithfulness per se, (2)encouraging people of faith to keep believing this trustworthy God despite a world of unbelief which doesn’t alter heaven’s ultimate reality, (3) both equally.

Conclusion:
When it comes to ‘faith (of) Jesus Christ’, it is certainly true that faith is a gift (Eph. 2:8-9 -‘by grace you have been saved through faith – and (all) this not of yourself, it is God’s gift (believed not achieved) so nobody boasts’, Acts 18:27 – ‘those who by grace believed’), as is the whole package of our salvation, our very life, and eternal life, all our blessings, etc. But that is a general theme of Scripture that is seldom intended specifically in Gospel texts explaining how we are to be saved. Yes, Jesus perfectly trusted the Father in His humanity on earth, but not in the same fallen sinful way we have faith in an unseen Father, so a proper distinction is made between Jesus’ trusting and our believing.

Yes, Jesus was faith(ful) to all the Father’s will, even obedience to death on a cross, which is another meaning of the Greek ‘pistis’. But again, this is a general theme of Scripture seldom mentioned in Gospel witness texts calling for repentant faith to be saved.

Prepositions make it abundantly clear what the intended meaning is of the Gospel: Put your faith into/inside/within Jesus to be saved. Place the whole weight of yourself upon Jesus for eternal life. When prepositions are absent, it is best to follow the prepositional texts to consistently inform non-prepositional ones.

Finally, since Jesus Christ as God’s Son is the only rightful object of saving faith, let us biblically and grammatically summarize the issue encompassing both prepositional texts and those without as follows:

If we picture the Lord Jesus belonging to us just as we belong to Him by faith, all texts can be unified as combining the Contentive, Locative and Descriptive/Plenary types of Objective Genitive (even some usage of Possessive Subjective Genitive if desired!)

Acts 26 – by their believing which belongs to- in- on- with Me to be forgiven and set apart as Mine.

Romans 3 – By faith belonging to- in- on- with Jesus Christ for all believers.

Galatians 2 – I live by faith which belongs to- in- on- with Jesus.

Saving faith is About Jesus, Concerning Jesus, Consisting of Jesus. Belief’s justifying/righteousing content and object is Jesus, the Ultimate Faithful Believable One.