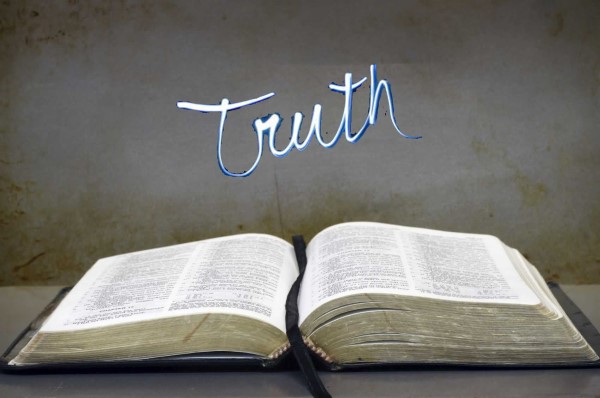 The Believable Bible itself documents how the Logos Lord passed along His Theopneustos God-breathing-out message perfectly worded as inspired communication.

Genesis –
The Lord spoke directly unmediated to all creation bringing it into existence by the Spirit of God’s hovering-vibrant-superintending power. “God said…”

The Lord spoke directly unmediated to Adam and Eve. (Satan the serpent claimed to know God’s real actual truth in trying to correct Eve’s supposed misunderstanding of the Lord’s directives, “Did God really say that?…You will not surely die, for God knows your eyes will be opened..” He is the first false prophet lying in God’s name.)

The Lord spoke directly unmediated to Enoch, Noah, Melchizedek, Abraham, Hagar, Isaac, Jacob, et al, usually by Voice from Heaven, sometimes by means of The Angel of the Lord (preincarnate Christ/Word-Logos of the Lord). Enoch is the first recorded prophet (Jude 14-15), although no doubt Adam passed along much-revealed truth from the Lord to Eve not received by her directly firsthand.

Exodus –
The Lord spoke directly to both Moses and Aaron. Moses received the burning bush revelation which Stephen confirms was the Lord’s Angel speaking out of the bush. Moses tried to excuse himself, but the Lord assured him he would be directly inspired (miraculously gifted, imparted, endued, taught, enabled) to be God’s spokesman. “I will help you speak and teach you what to say.” Moses still demurred. The Lord finally accommodated to allow Aaron to speak for Moses to speak for God.

The Lord told Aaron to meet his brother at Horeb the Mountain of God. “You Moses shall speak to Aaron and put words in his mouth. I will help both of you speak and will teach you what to do. Aaron will speak to the people for you, and it will be as if he were your mouth and as if you were God to Aaron.”

Apparently, Miriam, their sister was at least partly included in prophetic revelation per Numbers 12. Aaron’s son Eleazar, and Balaam the evil prophet also received messages from the Lord, either directly unmediated or via Angel of the Lord.

The Lord wrote personally His covenant commands on tablets of stone, anthropomorphically described as “with the Finger of God.” Yet no qualitative or essential distinction was made between God’s revealed Word verbally to Moses, et al or God’s revealed Word that Moses was to permanently record in writing and place in the ark of the covenant. God’s Word is God’s Word is God’s Word whether audible/vocal, written in stone or written on scrolls. Same source, same content, same authorized constitutional binding power.

Numbers 22-
Balaam’s burro is a poignant humbling example of how the Lord can miraculously communicate through unexpected means. God temporarily for a select purpose caused the beast of burden to speak to its master Balaam confirming the presence of the Angel of the Lord whom Balaam was unable to perceive at first. (Somewhat the reverse of God’s miracle of reducing mighty king Nebuchadnezzar to a senseless feather-haired wild beast ‘drenched with the dew of heaven’ in Daniel 4.) If God can inspire a donkey opening its mouth to speak just the right words, in this case, to spare her master from certain sudden death, imagine what the Lord can do through inspired prophetic messengers from Adam & Enoch to David & Malachi to John Baptist & Ananias & Paul & Apostles.

Jeremiah –
The Lord revealed to Jeremiah a brand-new covenant whereby He would write His Law on men’s hearts and minds so they would all know Him as Forgiver of Sins by Sheer Pure Grace and Mercy.

The Lord instructed Jeremiah the prophet to take a scroll and write on it the words He had previously received from God over the course of his ministry. Jeremiah had his scribe-servant Baruch take dictation (like Tertius did for Paul in Romans) and produced the scroll of God’s revealed Word to Jeremiah. This scroll was burned by the evil king of Judah. The Lord instructed Jeremiah to reproduce the scroll and add many similar words to what was on the original scroll.

John 10:35 –
The Lord Jesus responded to His enemies about to stone Him for blasphemy claiming to be Supreme Being with God Himself as His Father: “Is it not written in your Law, ‘I the Lord said you are gods’? If God called people gods with/toward whom God’s Word pertained/related – and the Scripture cannot be broken – (what would God call One actually related to Him as Son of His fathering?)”

The Jewish Law was utterly binding as supreme authority for the people – legally, morally, religiously, culturally, ethically and in every dimension of their existence. It was beyond dispute and there was no higher appeal than God’s Own Law. In this context (and John 17), ‘Law’ was a catchall term for Moses, Psalms & Prophets. Today we would say ‘The Law of the Land’ to encompass the Constitution, Bill of Rights and all federal, state and local laws and statutes rightfully established by legislative bodies and upheld by the judiciary. All legislation must be constitutional as taproot of the entire legal system. Beyond a mere nation of laws, we are in a higher sense a Nation of Law.

The phrase, “It is written” was a way of saying it is permanently settled, on record/file as once-for-all unamended set in stone as if a King’s royal proclamation or Magna Cartaor edict or pronouncement not subject to change, overruling, dismissal, or violation but absolute coin of the realm, period, Amen.

The Lord God Himself is speaking in the cited Psalm 82. The Psalms are not merely human or manmade, but directly quoting God Himself sourced from His declaring to men, not merely men suggesting or imagining what they suppose God does or says.

The Word of God is equated to the fixed set Law as it is written and to precisely what the Lord God Himself says in addressing recipients or beneficiaries of His communicated revelation for and about them preserved for future generations to apply to Christ in an ultimate sense as the Lord references here to hostile witnesses rejecting His testimony, thus rejecting the Word of God, thereby rejecting the God of His Word AND God’s Son.

Scripture is singular, the entire body of written revelation from God to His people, the sum inclusive of all its parts, in toto – from every jot and tittle at the micro level up to whole books in their entirety and all the books together as One Script at the macro level. Plenary, word for word, letter for letter, each dot and thought and full connecting of all dots and thoughts as an Organism created by God Himself in human format.

It cannot be broken – it is incapable, not possible, out of the question for it to be undone, fail to come to pass, unkept like a vow or promise or law of physics, tamed as a broken domesticated horse, broken down loosened or decomposed so as to lose potency, purity, authority or truth bearing capacity and essence as conveyer of ultimate reality. It is Absolute, cannot be dissolved, dissipated, corrupted, lessened, depleted, corroded, oxidized, rusted, worn out or subject to entropy, aging, deterioration, weakening, weathering, dissolution. It is absolved from all fault, flaw, mistake, sin, error, blame, guilt, accusation or human accountability. It is as Holy, Perfect, Righteous, Error free, Sinless, Faultless, True as its Author – the Word of the Lord by the Spirit of the Lord from the Father of our Lord Jesus Christ.

John 17 –
The Father gave to Jesus the precise word/words/wording of just what to say while on earth as the Son of God. He shared everything with his disciples who accepted it as from God Himself. Not just the word (logos – text, script, lyrics), but as spoken (rhema – vocals, uttered, voicing, audible, dialog said and heard). Upon his departure back to heaven, the Holy Spirit, the Spirit of Truth (can’t be anything else but absolute error free Truthbearer) would lead them into all truth, giving remembrance of all Jesus had imparted to them.

Revelation –
The entire book is a running documentary of how the Lord inspired John through a chain of command authority from heaven to produce the document we know as Revelation. Father to Son as Angel of the Lord to John. Repeated commands of “write down what you are seeing/hearing” recur throughout the book. “This word of God is trustworthy and true…these truly are the actual real words of God.”

A reference is made about wicked evildoers that “God put it into their hearts to accomplish His purpose.” Imagine what God does with cooperative chosen righteous good instruments of His will and purposes like producing Holy Scripture.

The book closes with a dire warning about adding to or taking away from the words of the prophecy in Revelation. Echoes of Deut. about God’s Words to Moses.

Conclusion:
The Bible has all its facts right. The Bible is the Truth, the Whole Truth, and Nothing but the Truth so help it, God! It is never the smart move to bet against anything the Bible says, claims, declares, predicts, promises, warns, teaches, informs, reveals, instructs, commands, guarantees, asserts, discloses, theologizes, overrides/corrects scientific theory, begs to differ with human wisdom/data postulations, has supremacy over satanic spiritual speculations.

Father, sanctify us in Truth, your Word is Gospel Truth! Amen!